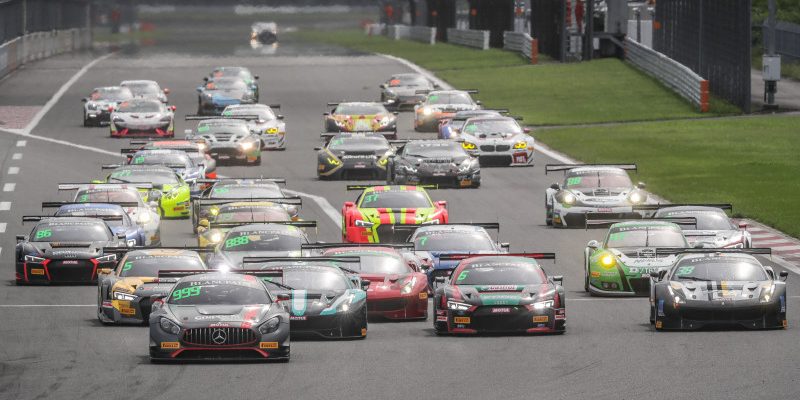 Maximilian Buhk celebrated a triumphant debut at his very first time at the Fuji International Speedway in Japan: At his second weekend participating for GruppeM Racing at the Blancpain GT Series Asia, the AMG-driver secured one class victory and P3 on the podium as well as a dominant start-finishing victory in the second race together with his team-mate Hunter Abbott.

Changing weather conditions made for different track conditions at the start of the weekend, but Buhk was competitive right from the beginning with strong lap times. Abbott and Buhk underlined the performance of the #999 Mercedes-AMG GT3 with seventh and second position in qualifying.

Hunter Abbott impressed at the start of race one, having come from seventh on the grid to run in P3 already after the first corner. After a quick run off the track, he made up positions again and handed the #999 over to Buhk from seventh place. Buhk re-joined the race in P11 and demonstrated a breath-taking charge through the field. Once he set the fastest laptime of 1:41.858, he improved immensely on each and every lap to overtake one after another of his competitors.

After setting another, absolute best sector 1 time, he improved by two seconds per lap towards the end and crossed the finishing line in third place. Buhk was not only the fastest driver in what was the strongest starting grid of this year´s Blancpain GT Series Asia with 34 GT-cars, but was also the best-placed Mercedes-AMG GT3 in the finish.

The 24-year-old was equally motivated going into the second race on Sunday and took the lead after a perfect start going into the first corner – a lead, which the crew of the #999 Mercedes-AMG GT3 did not let go until the end. Buhk pitted with nine seconds ahead right at the end of the pitstop window and Hunter Abbott continued in the lead of the race, despite having to add a further five seconds to the standing time during the pit stop due to third place on Saturday.

Hunter Abbott claimed his third race win of the season and the second together with Maxi Buhk. “I could not be happier”, said the Hamburg-based driver. “I have always wanted to drive here at Fuji and to celebrate my debut in that way is just great. Even more so since I was able to help Hunter to get important points for his fight for the championship title. Thank you to GruppeM Racing, it was a real pleasure to drive with them again and they did a great job!”

There is no rest for Buhk now since the next event with the second-to-last Sprint Cup race of the Blancpain GT Series is already taking place this coming weekend. Buhk shown with a great victory in the heat battle at the Hungaroring just outside the Hungarian capital of Budapest last year, this year, he arrives as the leading driver in the Sprint Cup standings.

“The season has been a great up and down with a few little mistakes that cost us important results”, said Buhk further. “This has to change for the remaining season. We had a very good weekend at Budapest last year and took the race win thanks to a strong team work. This year, we are arriving as leaders in the Sprint Cup, but we have the overall championship in our minds. 21 points behind seems like a lot, but taking into consideration that you get 25 points for a win, everything is still possible. A lot can happen in the coming races. But we have to avoid another retirement or a race without points.”