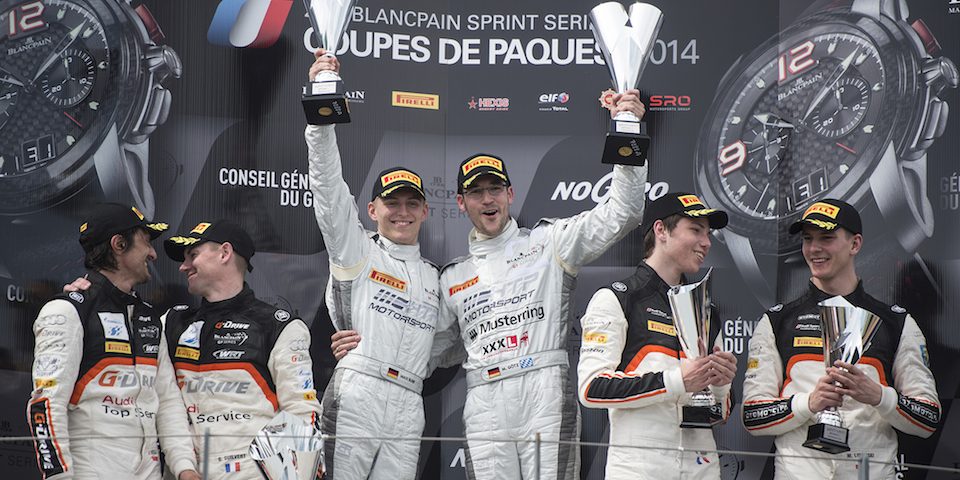 HTP Motorsport drivers Maximilian Buhk and Maximilian Götz took the win in the first Main Race of the 2014 Blancpain Sprint Series. With their Mercedes AMG SLS they crossed the finishing line of the Circuit Paul Armagnac in Nogaro with less than two seconds advantage over the #3 G-Drive Racing Audi driven by local favourites Stéphane Ortelli and Grégory Guilvert.

Sunny conditions greeted the drivers on the grid for the first main race of the 2014 Blancpain Sprint Series, but during the formation lap towards the rolling start drama hit the cars on the front row, when there was contact between the #1 Belgian Audi Club Team WRT Audi of Cesar Ramos and the #6 Phoenix Racing Audi driven by Niki Mayr-Melnhof. The Brazilian driver had to bring the car back to the pitlane, only to retire with suspension damage, while the Phoenix car retired halfway through the race, when the damage at the front of the Audi proved too important to continue.

The incident during the formation lap caused some confusion during the start and Sergio Jimenez was able to take the lead in the #0 BMW Sports Trophy Team Brasil car, edging in front of the #84 HTP Motorsport Mercedes driven by Maximilian Buhk. However,it did not take the reigning Blancpain Endurance Series champion long to take the lead, and from lap four the German driver was able to edge away from the chasing pack.

By the time Gregory Guilvert in the #3 G-Drive Racing Audi managed to overtake the Brazilian BMW, the HTP Motorsport Mercedes already had a lead of nine seconds. A fabulously quick pitstop by the G-Drive Racing mechanics – which earned them the 2.000 € cheque for winning the Pitstop Challenge – reduced the gap to only four seconds, with Stéphane Ortelli getting closer and closer to leader Maximilian Götz every lap. The German had the race under control however, and after 41 laps of the 3.636 km track he crossed the line to take the win in the first Main Race of the season.