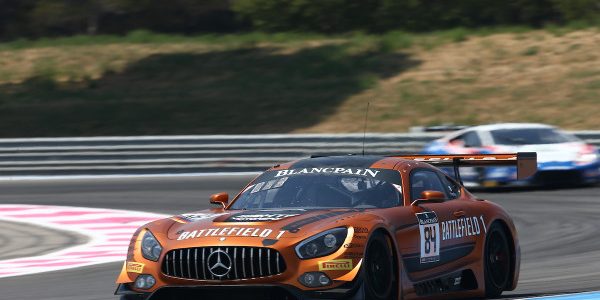 After eight dramatic races with lots of tension, the AMG-driver Maximilian Buhk will face his first great championship challenge this year at the international highly rated Blancpain GT Series round next week: The German racer will fight for winning the Sprint Cup title at the home circuit of his Mercedes-AMG Team HTP Motorsport at Nürburgring.

Buhk and his French team-mate Franck Perera started into the season with drums and beats, leaving the competitors way behind them racing their #84 Mercedes-AMG GT3 at the Italian track at Misano. Despite a permanent up and down, the HTP-drivers have continuously collected points for the championship and are now three points clear ahead of the final Sprint Cup race 2017.

Last year, the Sprint Cup final took place at the championship´s debut at Barcelona, this time Buhk takes to the challenge “title win Sprint cup” at his home race at Nürburgring. The 24-year-old reigning Blancpain GT Series Champion narrowly missed the Sprint Cup title last year after winning the crown back in 2015.

“Looking back at previous years, as a team we were not only able to fight for the titles but also to win them”, says Buhk. “It was extremely close last year at Barcelona. We had a five-point advantage back then, but we also had a very difficult weekend. We did not secure the Sprint Cup title but the overall Championship, which certainly is our main goal this year as well, but for the moment our focus is on the Sprint Cup race at Nürburgring.

At the last race at Hungaroring, Buhks and Pereras main title contenders, the #63 Lamborghini drivers Mirko Bortollotti and Christian Engelhart, made a big step forward in the standings. For the last two remaining races (season final Endurance Cup takes place 1st October at Barcelona), the title fight will be between Mercedes-AMG and Lamborghini.

“We are looking back at a really exciting and high-class season”, says Buhk further. “It´s been a while to see a championship to be so competitive along such a distance as we have seen it this year. Our main competitors have been Mirko (Bortollotti) and Christian (Engelhart) and we always had tough but fair fights, like at the Endurance Cup at Silverstone.

It´s always fun to drive against such strong drivers. We are now heading into the first final round and we will do everything to secure the Sprint Cup this year. Three points are not a lot, but being on home turf should be an advantage.”