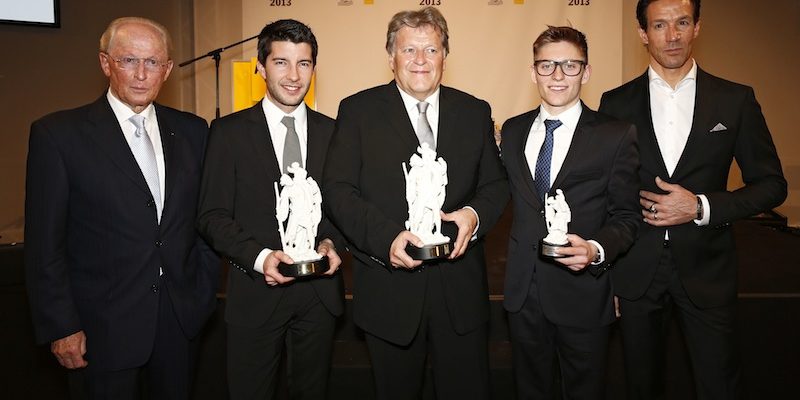 On Saturday night, the Mercedes Benz driver was named ADAC Junior Motor Sportsman of the Year during the ADAC sports gala held at ADAC headquarters in Munich.

Buhk is the first ADAC GT Masters driver to receive this award, which is decided by a jury composed of journalists and ADAC representatives. Buhk’s list of achievements in the 2013 season was certainly impressive: the young North German, aided by Maximilian Götz, secured his first victory in the Super Sports Car League at the wheel of a Mercedes-Benz SLS AMG and was a title contender all the way through to the finale. Of particular note were his wins in the 24 Hours of Spa and in the Blancpain Endurance Series, again in a Mercedes-Benz. „The ADAC Junior Motor Sportsman of the Year title is my first award and I am very pleased to receive this sign of appreciation from the ADAC,“ said Buhk.

Buhk: „This year, the successes came one after another and during the season there was hardly any time to enjoy it all. This award of ADAC Junior Motor Sportsman of the Year is nice and serves to remind me just how well we did this year.“ After two years in the Formel ADAC, Buhk switched to the ADAC GT Masters last year, becoming the youngest driver in the series. He began the 2013 ADAC GT Masters season in the etropolis Motorsport Arena Oschersleben by securing a pole position and, together with Götz, who is also a former ADAC junior, achieved his first win at the Nürburgring; in the title fight, the Mercedes-Benz drivers were beaten in the very last race. Buhk won the 24 Hours of Spa along with Götz and DTM record-breaking champion Bernd Schneider, and his team-mates helped him to the title in the Blancpain Endurance Series. Mercedes-Benz rewarded Buhk’s achievements with a DTM test. „My personal highlight of the season has to be the victory in the 24 Hours of Spa,“ said Buhk, who has been an ADAC member since the age of ten.

ADAC Sports President Hermann Tomczyk: „Maximilian Buhk took everyone by surprise and not just in the ADAC GT Masters. He is on the right track with his talent and ability. This award should serve as an added incentive to continue with his development.“

Jan Stecker, who presents the ADAC GT Masters races live for TV partner kabel eins, made reference in his address, praising the young Mercedes-Benz driver, to the refreshingly open nature displayed at all times by the ’super-cool‘ North German and paid tribute to his high-flying career: „What impresses me most about Maximilian Buhk and his career is the fact that in just 18 months of racing, he has won four international championships and two international titles.“