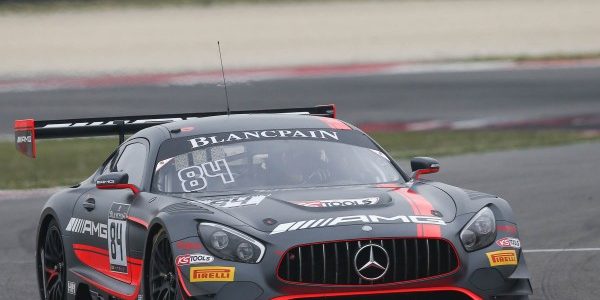 The start into the new Blancpain GT Series could not have been better for AMG-driver Maximilian Buhk: Following a strong second place in qualifying, the German driver secured victory in both the qualification race and the main race at the Italian track in Misano. With these impressive results, the first step towards title defence has been achieved with getting maximum points.

The performance of the Mercedes-AMG GT3 was already underlined during free practice on Friday with the improvement of the Pole Position time from last year at the Misano World Circuit. The 24-year-old title defender narrowly missed out on Pole by only 0.075 seconds, which was taken by the #66 Lamborghini of Mapelli.

Qualifying Race
The start into the one-hour qualifying race on Saturday evening was overshadowed by a horrific accident on lap two. A total of six cars were involved in the accident in the darkness and the race was stopped for 20 minutes. All drivers involved escaped unhurt.

The re-start was commenced behind the Safety Car for two laps. As the field was on its way towards the start-/finishing-line, the leading Lamborghini turned into the pitlane. Buhk claimed the lead in the #84 Mercedes-AMG GT3. In the opening laps of the race, the #63 Lamborghini with Bortolotti behind the wheel came dangerously close, however, Buhk kept a cool head, did not let the pressure get to him and managed to pull away lap by lap. After a good pit-stop and the hand-over to team-mate Franck Perera (FR), the #84 remained in the lead and secured the first victory in the first race.

Main Race
Perera started from first spot on the grid into the main race on Sunday lunchtime. The Frenchman was more than six seconds in the lead when coming into the pits. The HTP crew was able to complete a focused pit-stop and released Buhk to re-join the race still in first place. Buhk crossed the finishing line with more than 23 seconds ahead of the car in second place and secured win number 2 following an impressive performance in the first race weekend of the Blancpain GT Series Sprint Cup.

“This was a perfect weekend”, said Maximilian Buhk. “The team gave us an impeccable car and the set-up was right on the spot. We were able to attack better than our competitors and did not have the problems with the tyre wear as some did. For his first weekend with HTP, Franck did a really good job and as a driver pairing, we are already a good team.”

“However, it was clear to see that the field has come closer immensely. There were 13 cars in qualifying within 0.5 seconds. It will not be an easy season, but we will do everything to keep the lead in the championship after the coming races.”

Buhk is now leading the Blancpain GT Series Championship with 33 points, with a gap of 12 points to the second-placed, Steven Kane and Vincent Abril in the Bentley. The next race of the high-class GT Championship will take place at the high-speed track of Monza in three weeks. Buhk is aiming for a similar good opening race for the Endurance Cup.