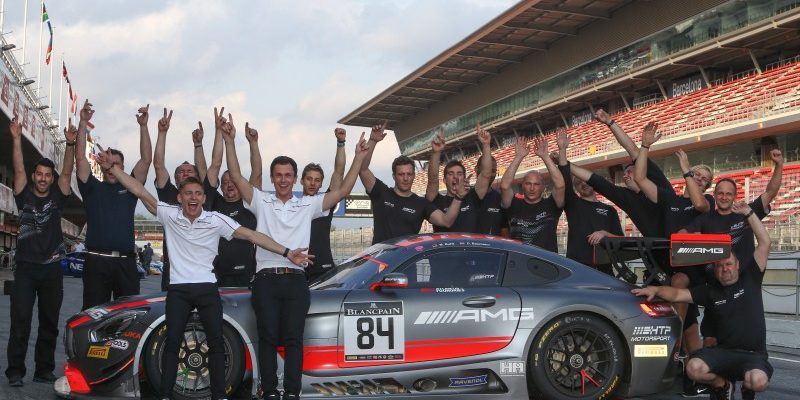 With winning the driver´s title in the Blancpain GT Series Overall Championship, Maximilian Buhk continues his extraordinary career in GT Motorsport. Despite an average weekend with no podium finish at the Circuit de Catalunya in Barcelona, the 23-year-old secured the driver´s title alongside team-mate Dominik Baumann from Austria.

Since he won the title in the Sprint Championship last year, Buhk crowned himself with the Overall Championship following an exciting season. However, the journey to victory was rocky: After a weak performance in qualifying and a turbulent qualification race, Buhk was far beyond his own expectations.

Buhk´s team-mate did not take any risk going into the finale race on Sunday afternoon, settling in eighth position. Lap after lap, the #84 Mercedes-AMG GT3 was stuck in traffic unable to make-up positions. Buhk was also held-up by the Phoenix Audi and was unable to attack. Buhk would have needed one position better up in order make the triple complete by taking the Sprint title, with the AMG-Team HTP having had won the overall team championship.

“Of course it feels great to have won the championship, although I am a little disappointed about the way the season has ended. I would have wished to stand on the podium at the end of the season and have a nice round-up of the year”, said the driver from Hamburg. “It was not an easy race; we were stuck in traffic behind someone who made life unnecessary difficult for us. But in the end, we have won the title and it is great to have followed-up from the Sprint title last year to now be the overall champion.”

With only 23 years of age, Buhk is still right at the beginning of his career, but reflects upon an extraordinary career. Together with Baumann, he was the 2012 FIA GT3 Champion, the year after he won the Blancpain Endurance Cup title with only three races and also wrote history by being the youngest ever driver to win the 24 hours of Spa.

“It would have been nice, to also be Sprint Champion this year, but the overall championship is now the ultimate crown”, says Buhk. “We have not been quick enough all weekend and we were lucky to take the title home. Since 2012, a lot has happened and I am not tired yet to win more titles and races. All in all, 2016 was a very successful year, I have learned a lot as well, especially from mistakes like the one at the 24-hours at Nürburgring. These experiences make me stronger and I am already excited about the upcoming season.”