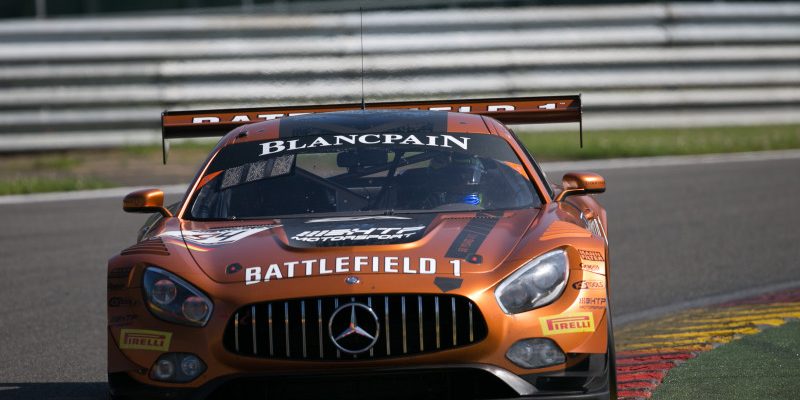 More than 60 GT3 racing cars are ready to ride one of the most breath-taking race tracks in the world. And so is the Hamburg-based driver Maximilian Buhk, who is looking ahead with excitement to one of the season´s highlights: The Total 24 Hours of Spa, which will take place at the rollercoaster ride through the Ardennes at Spa-Francorchamps at the end of July.

Despite his young age of 24 years, Buhk already belongs to the „old-iron-league“ of drivers around the approximately 7-kilometre-long track. In 2013, when he debuted aged only 19, the AMG-driver climbed the top podium and took overall victory together with the experienced Bernd Schneider and Maximilian Götz.

Buhk will race at Spa for the fifth consecutive time in 2017 and is optimistic following an exciting and varied season to date. “Of course, I would like to repeat my victory from my debut year in 2013”, says Buhk. “But you can´t predict a 24-hour race. Especially Spa is a very hot ground not least because of the unforeseeable, freak weather that can ruin whole strategies. Taking this into consideration, I would be happy to have a clean and faultless race. But in the end, we will try to take home as many points as possible towards the championship.”

The points scored at Spa are counted towards the Endurance Cup and Buhk, together with his team-mates Franck Perera (France) and the Swede Jimmy Eriksson, is currently running in fourth place with a gap of 18 points to the lead. “If it went really bad, Spa could damage your whole championship, especially if your strongest competitors finish in the front spots and you don´t earn anything.”

As the tradition goes, the opening of the weekend is celebrated with a unique cars and drivers parade from the race track to the centre of town of Spa. The streets are lined by numerous fans who cheer on the entire grid on its way to Spa. “The parade is something really special, after all when do you ever get the chance to drive a GT3 car on a normal road. The fans are everywhere and it is just great.”

It will start getting serious from Thursday with the first free practice, followed by qualifying and night practice, which will be the preparation for Super Pole on Friday. The race will start on Saturday at 4:30 pm.