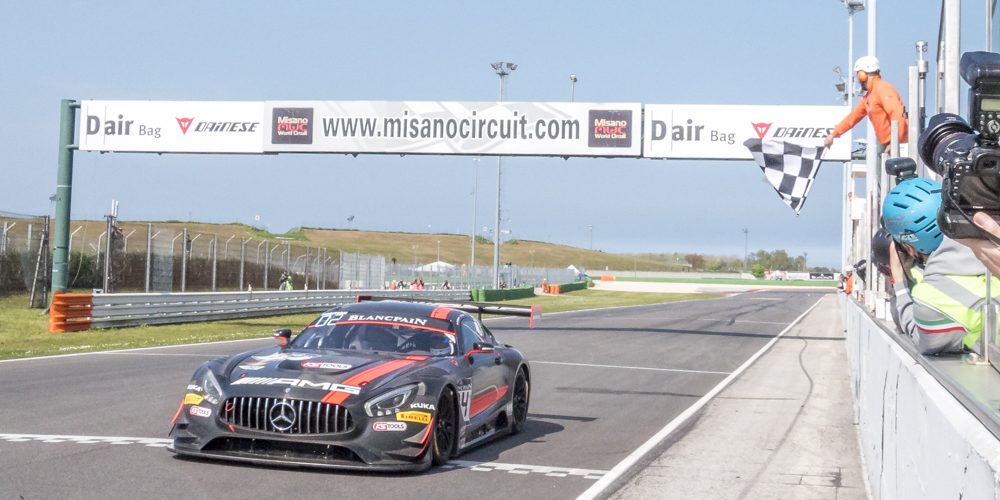 Strong season start for the champion Maximilian Buhk in the Blancpain GT Series Sprint Cup. At the season start in Misano /Italy the young Hamburger fought right away for victory in the new Mercedes-AMG GT3 of the AMG-team HTP Motorsport together with his colleague Dominik Baumann. In the end the Mercedes AMG duo missed the victory after 60 race minutes with barely 1,6 seconds. “A great weekend! I didn’t expect to be able to drive in the top positions in our first two sprint races let alone to be on the podium,“ said Buhk. He was enthusiastic about the first cup of the young season.

At the season start of the Blancpain GT Series Sprint Cup the field of competitors was as full as never before. The duo Buhk/Baumann had to cope with 38 competitors altogether in Italy. But the first sprint weekend with the new Mercedes AMG succeded with flying colours: In the qualifying the two FIA-GT3-European champions of 2012 obtained a perfect position with number seven on the start list. In the following qualifying race Buhk already aimed for the podium half way through the race, when a unfavourable timed full course yellow phase pushed two competitors to the lead and prevented the HTP-duo of gathering podium points. Ranked fifth Buhk/Baumann nevertheless ensured a good starting position for the main race.

On Sunday Baumann managed to have a good start phase. The Austrian worked up from position five to two until the driver change. In the second part of the race Buhk reduced the gap to the leader from about five seconds to only 1,6 seconds and saw the chequered flag as second. „I’m very satisfied,“ said Buhk after the weekend. „We reached our goal of doing a good job at the weekend, we didn’t get a fine and made a lot of points. As a bonus we had two great and very fair races which were much fun. Our speed was very good considering the mixed conditions and the changing weather. But before I didn’t expect to be able to compete for victory on a dry racetrack, too. It was fantastic to start with Dominik again and the hard work of the last months also paid off for HTP Motorsport.“

Because of the good result Buhk feels positive about the races to come: “The new Mercedes-AMG GT3 was really fast in our first race this weekend, but we also realized the potential especially in the set-up. This will help us in the coming races, above all to be closer to the front in the qualifying.“

For Buhk it will go very rapidly with facing two long-distance races. At the next weekend he’ll compete in the qualifying race for the 24-hour race at the Nuerburgring, followed by the Blancpain Sprint Series Endurance Cup in Monza.