Heart-stopping final and P2 for Maximilian Buhk in Silverstone 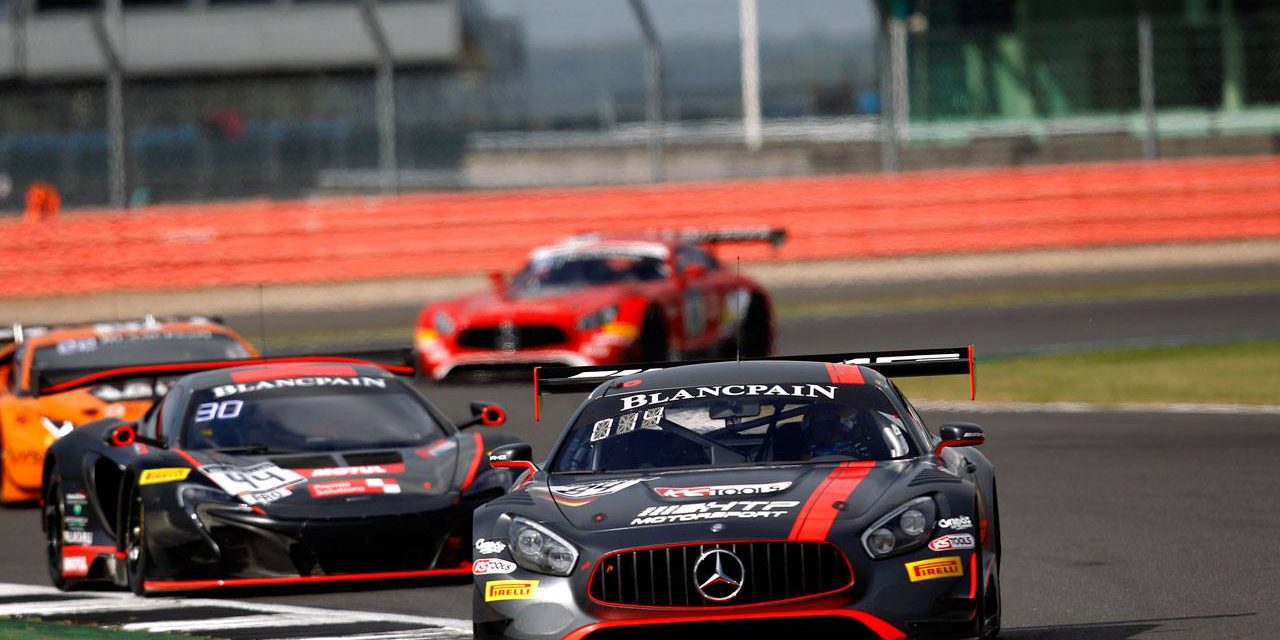 The reigning driver champion Maximilian Buhk experienced a true nerve-racking heart-stopping final at the second round of the Blancpain GT Series Endurance Cup. At the “Home of British Motorsport” in Silverstone, the Hamburg-based driver narrowly missed out on race victory by 0.344 seconds, following a tough but fair fight with the #63 Lamborghini. Buhk is now in second place in the overall championships standings with a gap of 12 points.

After a disappointing weekend at the Sprint Cup in Brands Hatch the week before, the HTP Motorsport crew was able to play with the front runners right from the beginning of the second Endurance Cup race weekend. Buhk and his team-mate set seventh and third best time in Saturday´s free practice sessions and underlined the good performance of the #84 Mercedes-AMG GT3 around the 3.660-mile-long track. The 24-year-old confirmed the potential with provisional Pole Position in the second qualifying session on Sunday morning, with team-mate Franck Perera taking third place in the silver arrow for the grid into the three-hour race.

Perera started into the race and completed the first stint, which saw him running in the positions between second and fourth. On lap 24, the Frenchman stopped in the pits to hand over the #84 Mercedes-AMG GT3 to team-mate Jimmy Eriksson (SWE), who re-joined the race in P5. Especially towards the end of the second stint, the exciting fight for the front positions was not to be topped. The first three race cars, with Eriksson running in second position, were racing within half of a second.

On lap 51, the first five leading cars all stopped at the same time for the last driver change. Maxi Buhk was the third driver to climb on board the #84, but suffered bad luck when he was forced to let both the Grasser Lamborghini and the AKKA ASP Mercedes pass him in the pitlane. After that, he lost immense time whilst trying to overtake backmarkers. The 24-year-old was full of motivation and with 25 minutes to go until the chequered flag, he finally took second place of the #90 AKKA ASP Mercedes. He was then once again blocked by a slow backmarker (Lamborghini) again and lost 2.7 seconds to the leading car, the #63 Lamborghini driven by Christian Engelhart.

The duel between Buhk and Engelhart got very intense on the last race kilometres. Buhk was running nose-to-tail with the Lamborghini, but was unable to pass. With a mere 0.344 seconds, the AMG-driver crossed the finishing line in second place and has now come closer to the lead in the points rankings.

“I had a really great race and it was a lot of fun to drive today”, said Maximilian Buhk after the race. “Every driver did a really good stint today. I must admit, that I had a few problems at the beginning of my stint. I was overdriving the car and the tyre pressure was slightly too high. I adapted to that and the overall balance of the car improved. I was in a position to close the gap and had a really cool fight with Christian Engelhart. We were both running on the limit, but it was fair all the time and that´s what great racing is all about.”

The 24-year-old AMG-driver will now head to Thailand for his debut in the Blancpain GT Asia Series, in which he will race this coming weekend at the Chang International Circuit.