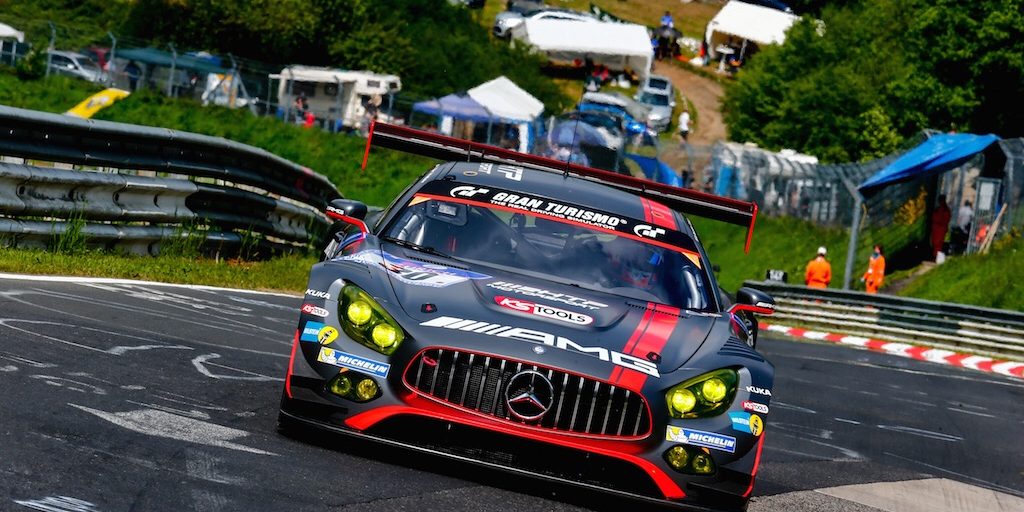 Blessing in disguise it was for the young Maximilian Buhk at his ADAC Zurich 24h race debut at Nuerburgring’s Nordschleife. After capricious weather conditions and a re-start the #30 Mercedes-AMG GT3 of AMG-Team HTP Motorsport was on P3 until an accident in the middle oft he

By winning the 6-hour qualification race #30 Mercedes-AMG GT3 already was approved for the top-30 qualifying. It was up to Stefan Mücke to set the best possible grid position. After the start drawing Mücke went out onto the Nordschleife and set the 11th best laptime.

Maximilian Buhk was supposed to get in the card as strong third driver. Straight at the start Dominik Baumann gained a few places when the infamous Nordschleife weather lived up to its reputation in the fifth lap. A rare seen mix of thunderstorm, rain an hail turned parts of the track temporary into a slippery slope on which numerous race cars weren’t able anymore to move. Amongst them also #30 Mercedes-AMG GT3, piloted by Baumann at this stint. However, the slight contact on the right side didn’t enable Baumann to drive the car back into the pits, after the race was stopped under red flag. At 07:00 pm the whole grid started into the new formation lap and after four laps behind the safety car the lights turned green again.

As second pilot Thomas Jäger got behind the wheel and managed to stay constantly within the top-4. He was followed by Maximilian Buhk from Hamburg, who set his very first laps in a GT3 car on the Nordschleife in the total darkness. On the high-speed track section Adenauer Forst the 23-year old lost control of his car and crashed with high-speed into the crash barriers. Luck was on his side and Buhk remained unharmed, even though the vehicles got damaged irreparable.

“Looking back I have to confess that I obviously lacked a bit in concentration and was to late on the brakes”, Maximilian Buhk sais. “For sure I missed the apex by half a metre. The next turn is a left-hand bend that I took straight over the curb, onto the wet grass and then ended in the crash barrier straight away. The impact was quite massive and my back also hurts a bit. I’m very sorry for my Driver colleagues and the whole team. If you have a look at the final race result we definitely were highly competitive and would have been able to finish at the very front.”

Maximilian Buhk’s next race will take place on June 24th / 25th 2016 in Paul Ricard (France) when he’ll try to increase his lead in the Blancpain GT Series Endurance Cup.