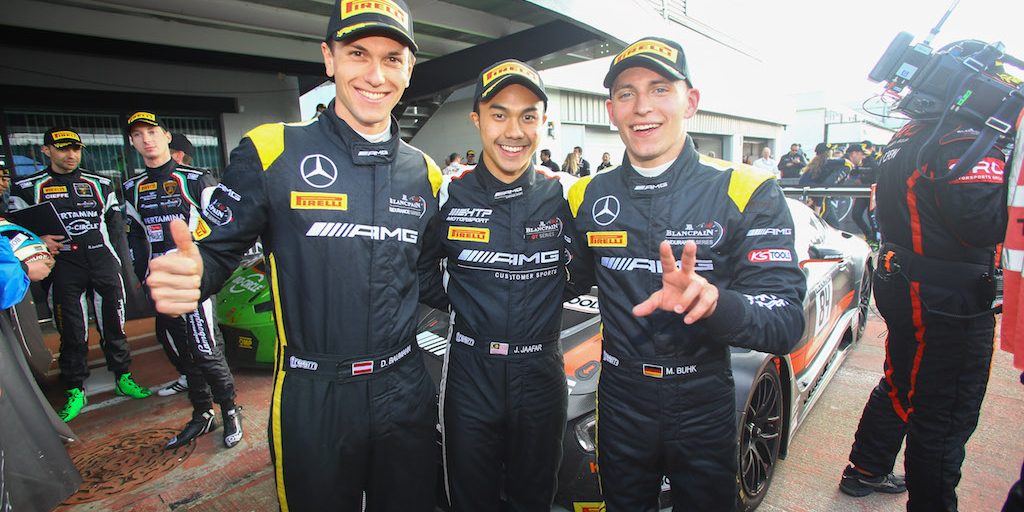 AMG-Team HTP Motorsport driver Maximilian Buhk had every reason to celebrate: By providing an excellent final stint of the Blancpain GT Series Endurance Cup three hour race in Silverstone, the driver from Hamburg secured his season’s first victory with the #84 Mercedes-AMG GT3 and retrieved the driver championship’s lead.

Following two second-place podium finishes in the Blancpain GT Series (Sprint Cup in Misano as well as Endurance Cup in Monza), he secured a fantastic race victory at the Endurance Cup in Silverstone. Buhk set the perfect conditions for a brilliant race with fourth quickest time in qualifying. His Austrian team colleague Dominik Baumann had a good start of the endurance race and gained ground right from the beginning. Following the fastest lap of the race by then and being placed third, he handed the car over to his teammate Jazeman Jaafar. The young Malaysian controlled his stint and managed to take the lead on lap 36.

Also in the second pit stop AMG-Team HTP Motorsport provided a great job and Buhk managed to get back on track as the race leader. Despite a lot of traffic and a slightly chaotic safety car phase, Maximilian Buhk kept the lead in the last stint and secured the team’s first win of 2016 Blancpain GT Series season.

Buhk has taken back both, the top position of the Endurance Cup driver championship as well as the lead in the overall standings.

“Special thanks go to my team and my driver colleagues”, says the 23 year old. “We all did a great job today and the pit stops were perfect. I was able to push over the whole stint distance and tried not to make any mistakes while overtaking backmarkers which ended successfully. The safety car phase was pretty chaotic and you couldn’t tell when lights would turn green again, but in the end it was ok. Even though the Audi was able to catch up I managed to keep the gap until the end of the race. An extraordinary success for us – I’m super happy.”