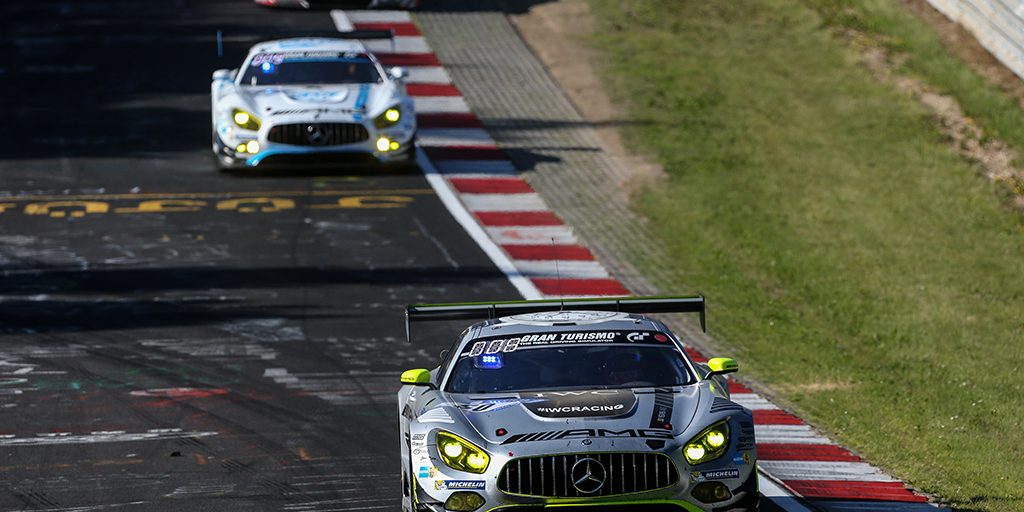 Maximilian Buhk took part for the second consecutive time in one of the most legendary and toughest 24-hour races last weekend: at the 45. ADAC Zurich 24h-Race at the Nürburgring, the 24-year-old AMG-pilot aimed to make-up for last year’s DNF with a conciliatory result. However, right before the end, chaotic weather conditions flooded parts of the Nordschleife and stopped Buhk´s great comeback-drive in the #50 Mercedes-AMG GT3.

The preparations for the 24-hour race were in full swing over the past weeks. The Hamburg-based Maximilian Buhk took part amongst six further Mercedes-AMG GT3 in the 50th anniversary year of the AMG brand, racing for the Mercedes-AMG Team HTP Motorsport with great ambitions.

In the first qualifying, the #50 “Silver Arrow” of Buhk, Baumann, Mortara and Sandström lapped the 23rd fastest time, in the second qualifying the foursome improved up into a Top-10 position. “We still needed the blue light for our car for the Top-30 qualifying and it was extremely difficult. Especially during the first session, there was a lot of traffic and the track was really tight. But all Top-teams faced the same problems. The car felt great and we managed to reach our goal.”

Buhk got the starting number 22 in the draw for selecting the Top-30 qualifying running order. After two fast laps, he placed the #50 Mercedes-AMG GT3 in P15. “It was very important to us to qualify in the first half of the grid to avoid the risk of being involved in a starting accident”, said the 24-year-old. “I really gave everything. My lap was not faultless, because I had some problems with the balance. But it was a once in a lifetime experience to have this amazing race track all to yourself for two laps – you almost never get that.”

Buhk also took behind the wheel of the race car for starting the race on Saturday at 3:30pm. With warm and summery temperatures scoring above the 25° C, it was mainly down to keeping a cool head. Unfortunately, Buhk did not have the best of starts and was involved in a collision with a Porsche. After a quick pitstop to change a damaged tyre, the Hamburg racing driver returned to the track. “After the contact, the steering wheel was not straight anymore and the balance of the car was also affected, but we simply had to continue”, said Buhk.

As expected, the tyres were causing most of the problems, since tyre manufacturers were not prepared for the hot track conditions. Earlier as planned, the team had to pit for their routine pitstops. But thanks to faultless stints by all four pilots and great pitstop-work by the HTP-crew, the #50 Mercedes-AMG GT3 slowly worked its way up the ranking and was soon running in the Top-10. During the night, the “Silver Arrow” was already running in a promising sixth position and kept it right before the end of the race.

But it would not be Nürburgring had it not rained at least once. And so, it happened right before the end of the race: torrential rain flooded parts of the track. The GT3 cars were slowly making their way around the Eifelkurs in tricky and almost not driveable conditions. Accidents were happening left, right and centre and the ranking was thrown apart. Unfortunately, the #50 Mercedes-AMG GT3 also suffered from these conditions. Whilst Buhk was running in the final stint, he ran into the barriers on Slicks in Metzgesfeld and was not able to bring home the sixth place – he was excluded from the standings.

“Both the team and myself would have been happy with a sixth place”, said Buhk after the race weekend. “We worked so hard and gave everything. We made no mistakes and always followed our goals, we also survived the night without any issues. The rain started very sudden and very heavy and I had no chance keeping the car on track. This was my second accident in my second 24h-Race, whilst I was sitting in the car and I am extremely disappointed, especially since we had such a great comeback. This year, it is almost worse than last year, because it was so close before the end of the race and we were running in a good position. But we will not let it get to us and next year there will be a new chance for the challenge “24h-Race”.

Buhk will now rest for a few days before heading into his next race meeting. The Blancpain GT Series Sprint Cup is taking place at the Belgium track in Zolder next weekend. Following the good results from Misano and Brand Hatch, Buhk and team-mate Franck Perera are aiming to extend their lead in the Sprint-Cup Championship.